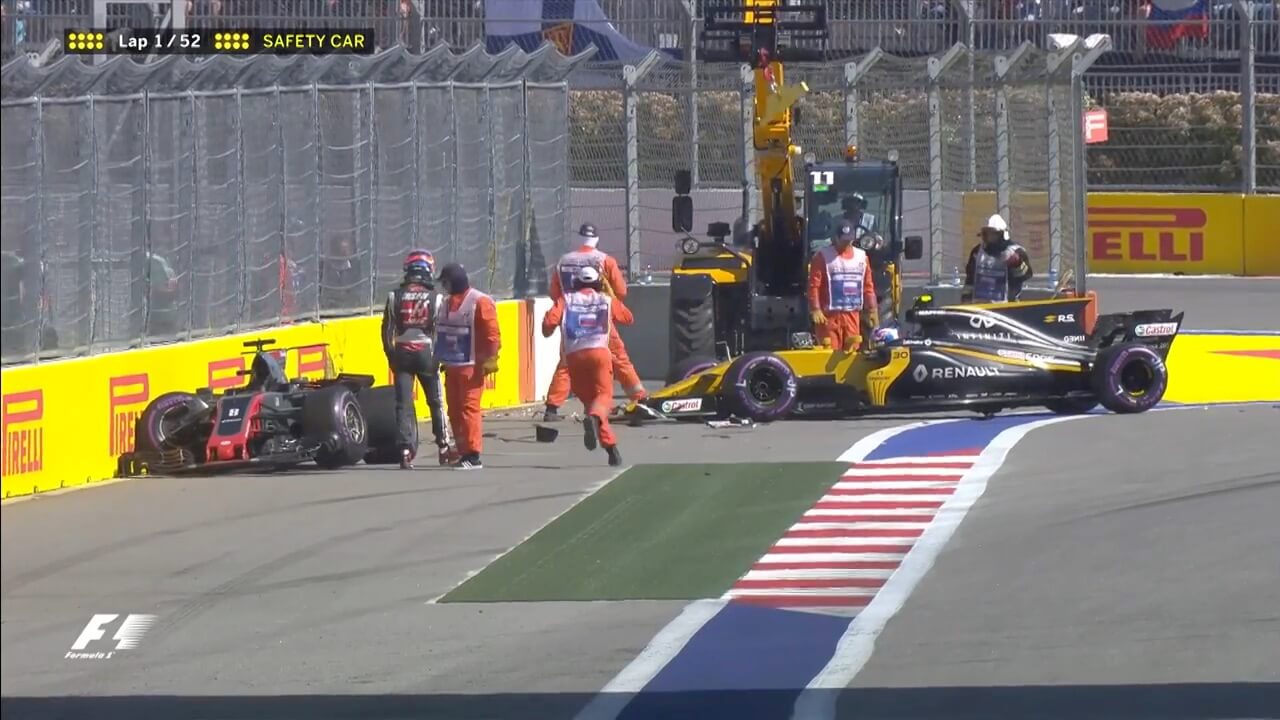 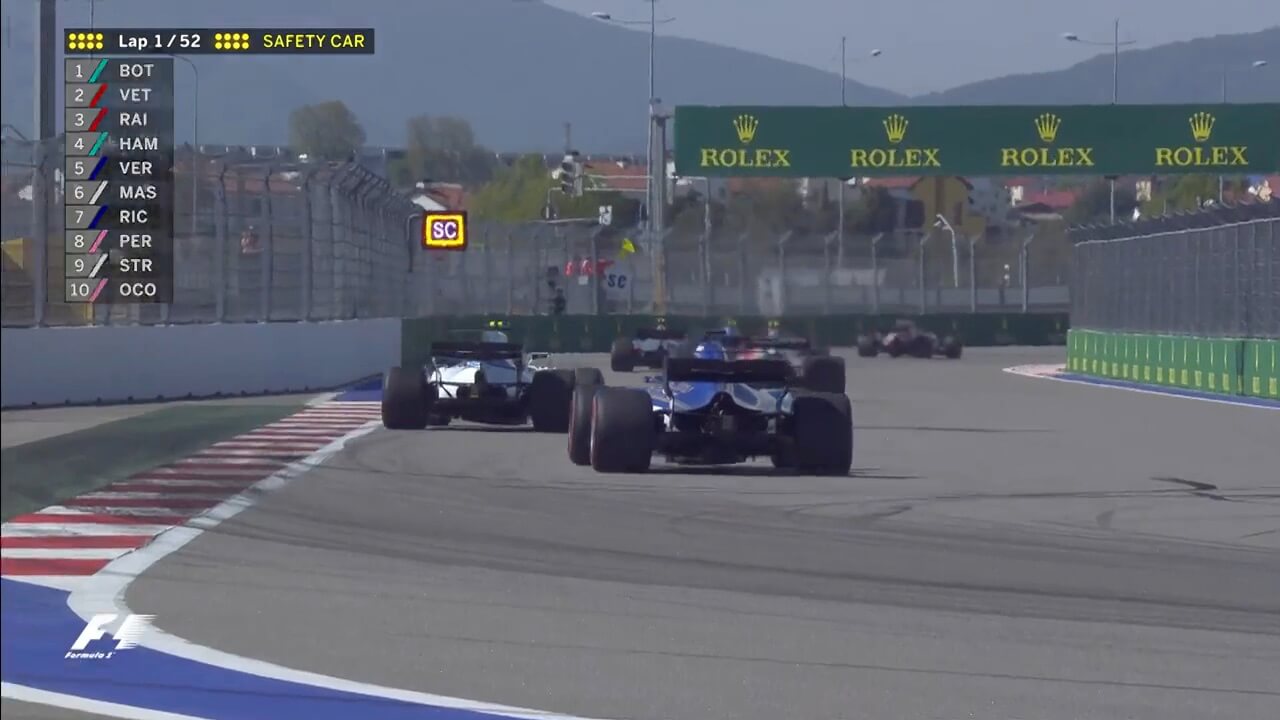 55.1 The FIA safety car will be driven by an FIA appointed safety car driver and will carry an FIA safety car observer capable of recognising all the competing cars who is in permanent radio contact with race control.

55.3 The safety car may be brought into operation to neutralise a sprint session or a race upon the order of the clerk of the course.

a) It will be used only if Competitors or officials are in immediate physical danger on or near the track but the circumstances are not such as to necessitate suspending sprint session or the race.

55.4 When the order is given to deploy the safety car the message “SAFETY CAR DEPLOYED” will be sent to all Competitors via the official messaging system, all FIA light panels will display “SC” and all marshal’s posts will display waved yellow flags and “SC” boards for the duration of the intervention.

55.5 No car may be driven unnecessarily slowly, erratically or in a manner which could be deemed potentially dangerous to other drivers or any other person at any time whilst the safety car is deployed. This will apply whether any such car is being driven on the track, the pit entry or the pit lane.

55.6 The safety car will join the track with its orange lights illuminated and will do so regardless of where the leader is.

55.7 All competing cars must reduce speed and form up in line behind the safety car no more than ten car lengths apart. In order to ensure that drivers reduce speed sufficiently, from the time at which all Competitors have been sent the “SAFETY CAR DEPLOYED” message using the official messaging system until the time that each car crosses the first safety car line for the second time, drivers must stay above the minimum time set by the FIA ECU at least once in each marshalling sector and at both the first and second safety car lines (a marshalling sector is defined as the section of track between each of the FIA light panels).

55.8 With the exception of the cases listed under a) to h) below, no driver may overtake another car on the track, including the safety car, until he passes the Line (see Article 5.3) for the first time after the safety car has returned to the pits.

a) If a driver is signalled to do so from the safety car.

c) When entering the pits a driver may pass another car remaining on the track, including the safety car, after he has reached the first safety car line.

d) When leaving the pits a driver may overtake, or be overtaken by, another car on the track before he reaches the second safety car line.

e) When the safety car is returning to the pits it may be overtaken by cars on the track once it has reached the first safety car line.

f) Whilst in the pit entry, pit lane or pit exit a driver may overtake another car which is also in one of these three areas.

g) Any car stopping in its designated garage area whilst the safety car is using the pit lane (see Article 55.11 below) may be overtaken.

h) If any car slows with an obvious problem.

55.9 When ordered to do so by the clerk of the course the observer in the car will use a green light to signal to any cars between it and the leader that they should pass. These cars will continue at reduced speed and without overtaking until they reach the line of cars behind the safety car.

Other than when the cars and the safety car are required to use the pit lane, no car may enter the pits whilst the safety car is deployed unless it is for the purpose of changing tyres.

55.12 If the clerk of the course considers track conditions are unsuitable for overtaking the message “OVERTAKING WILL NOT BE PERMITTED” will be sent to all Competitors using the official messaging system.

55.13 If the clerk of the course considers it safe to do so, and the message “LAPPED CARS MAY NOW OVERTAKE” has been sent to all Competitors using the official messaging system, all cars that have been lapped by the leader will be required to pass the cars on the lead lap and the safety car.

This will only apply to cars that were lapped at the time they crossed the Line at the end of the lap during which they crossed the first Safety Car line for the second time after the safety car was deployed.

Having overtaken the cars on the lead lap and the safety car these cars should then proceed around the track at an appropriate speed, without overtaking, and make every effort to take up position at the back of the line of cars behind the safety car. Whilst they are overtaking, and in order to ensure this may be carried out safely, the cars on the lead lap must always stay on the racing line unless deviating from it is unavoidable.

Unless the clerk of the course considers the presence of the safety car is still necessary, once the message “LAPPED CARS MAY NOW OVERTAKE” has been sent to all Competitors using the official messaging system, the safety car will return to the pits at the end of the following lap.

55.14 When the clerk of the course decides it is safe to call in the safety car the message “SAFETY CAR IN THIS LAP” will be sent to all Competitors using the official messaging system and the car’s orange lights will be extinguished. This will be the signal to the Competitors and drivers that it will be entering the pit lane at the end of that lap.

At this point the first car in line behind the safety car may dictate the pace and, if necessary, fall more than ten (10) car lengths behind it.

In order to avoid the likelihood of accidents before the safety car returns to the pits, from the point at which the lights on the car are turned out drivers must proceed at a pace which involves no erratic acceleration or braking nor any other manoeuvre which is likely to endanger other drivers or impede the restart.

55.15 Each lap completed while the safety car is deployed will be counted as a sprint session lap or race lap. However, if the procedure set out in Article 49) is followed, Article 5.3a)ii) or Article 5.4c) as appropriate will apply.

55.16 If the safety car is still deployed at the beginning of the last lap, or is deployed during the last lap, it will enter the pit lane at the end of the lap and the cars will take the end-of-session signal as normal without overtaking.