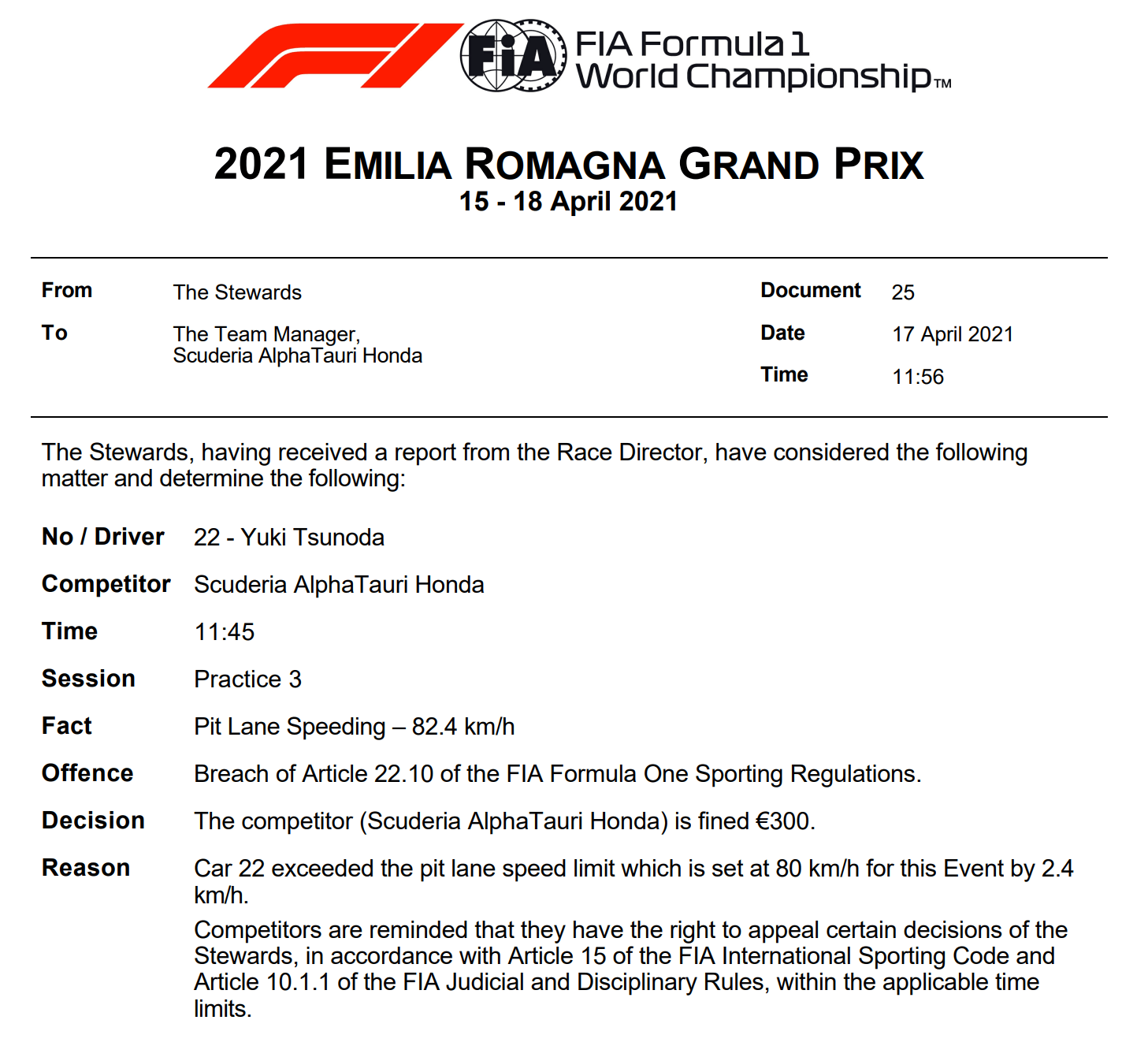 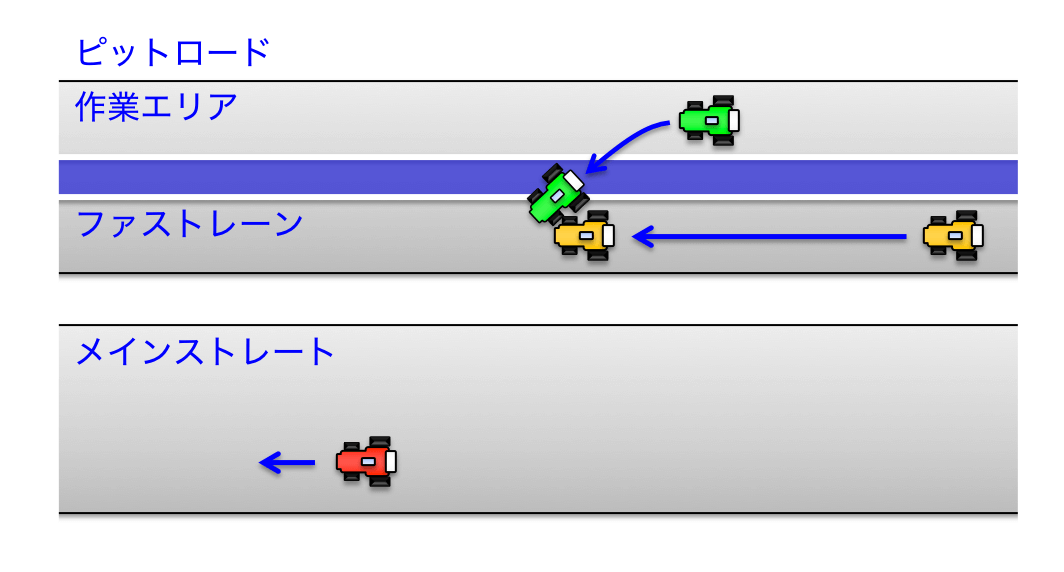 34.1 The section of track between the first safety car line and the beginning of the pit lane will be designated the “pit entry”.

34.2 The section of track between the end of the pit lane and the second safety car line will be designated the “pit exit”.

34.3 At no time may a car be reversed in the pit lane under its own power.

Other than when cars are at the end of the pit lane in accordance with Articles 43.3. 44.2 and 57, the inner lane is the only area where any work can be carried out on a car. However, no work may be carried out in the fast lane if it is likely to hinder other cars attempting to leave the pit lane.

34.5 The FIA will allocate garages and an area in the pit lane on an equal basis where each Competitor may work and, within each of these designated garage areas, one position where pit stops during any practice session, sprint session or the race may be carried out.

34.6 No powered device may be used to lift any part of a car in the pit lane.

34.7 A speed limit of 80km/h will be imposed in the pit lane during the whole Event. However, this limit may be amended by the Race Director following a recommendation from the Safety Delegate.

a) Any Competitor whose driver exceeds the limit during any practice session will be fined €100 for each km/h above the limit, up to a maximum of €1000.

b) In accordance with Article 18.1 the stewards may impose an additional penalty if they suspect a driver was speeding in order to gain any sort of advantage.

34.8 Unless a car is pushed from the grid at any time during the start procedure, cars may only be driven from the Competitors’ designated garage area to the end of the pit lane.

Any car(s) driven to the end of the pit lane prior to the start or re-start of a practice session must form up in a line in the fast lane and leave in the order they got there unless another car is unduly delayed.

34.9 With the exception of the reconnaissance laps permitted by Articles 43.2 and 44.1, any driver that is required to start the sprint session or the race from the pit lane may not drive his car from his Competitors designated garage area until the pit lane exit is closed before the scheduled start of the formation lap and must stop in a line in the fast lane.

Under these circumstances working in the fast lane will be permitted but any such work is restricted to:

a) Starting the engine and any directly associated preparation.

b) The fitting or removal of permitted cooling and heating devices.

c) Changes made for driver comfort.

When cars are permitted to leave the pit lane they must do so in the order that was established under Articles 43.3 and 44.2 unless another car is unduly delayed. At all times drivers must follow the directions of the marshals.

34.10 Other than by drying or sweeping, or by laying tyre rubber when cars leave their pit stop position, Competitors may not attempt to enhance the grip of the surface in the pit lane unless a problem has been clearly identified and a solution agreed to by the Safety Delegate.

34.11 Competitors must not paint lines on any part of the pit lane.

34.12 Other than when detailed in Article 34.9, no equipment may be left in the fast lane.

34.13 Team personnel are only allowed in the pit lane immediately before they are required to work on a car and must withdraw as soon as the work is complete.
All team personnel carrying out any work on a car in the pit lane when the car is in its pit stop position during the qualifying practice session, sprint session or during a race pit stop, must be wearing helmets which meet or exceed the requirements of ECE 22.05 – European motorcycle road helmet, DOT – USA motorcycle road helmet or JIS T8133-2015, class 2 – JPN protective helmets for automobile users. The use of appropriate eye protection is compulsory.

34.14 In all of the cases detailed in this Article 34.14, a car will be deemed to have been released either when it has been driven out of its designated garage area (when leaving from the garage) or after it has completely cleared its pit stop position following a pit stop.

a) Cars must not be released from a garage or pit stop position in way that could endanger pit lane personnel or another driver.

b) Competitors must provide a means of clearly establishing, when being viewed from both above and in the front of the car, when a car was released.

c) If a car is deemed to have been released in an unsafe condition during any free or qualifying practice session, the stewards may drop the driver such number of grid positions as they consider appropriate.

d) If a car is deemed to have been released in an unsafe condition during a sprint session or a race, a penalty in accordance with Article 54.3d) will be imposed on the driver concerned. However, if the driver retires from the sprint session or the race as a result of the car being released in an unsafe condition a fine may be imposed upon the Competitor.

e) An additional penalty will be imposed on any driver who, in the opinion of the stewards, continues to drive a car knowing it to have been released in an unsafe condition.

34.15 In exceptional circumstances the Race Director may ask for the pit entry to be closed during the sprint session or the race for safety reasons.

a) At such times drivers may only enter the pit lane in order for essential and entirely evident repairs to be carried out to the car.

b) A penalty in accordance with Article 54.3d) will be imposed on any driver who, in the opinion of the stewards, entered the pit lane for any other reason whilst it was closed.